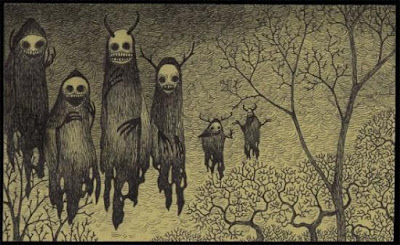 If, like me, you’d rather spend Halloween watching unsettling films than going to a cheesy club dressed as a slutty fishmonger and dancing to the Ghostbusters theme, you might like to give one or more of these films a go. I wade through a lot of horror films, most of which are mediocre at best. But every now and then I come across a disturbing gem that gives me hope that there are film-makers out there who understand that you can be subtle and ‘scary’, i.e. we need a bit more than a vase shattering on the floor and a curtain mysteriously wafting by an open window for a film to have a psychological impact greater than that of a big-budget Most Haunted special.

So, in rough order of entertainment/terror value, and with a high regard for the validity of my own opinions firmly established, here are my five recommended horror/thriller creep-fests that you can find on Netflix* (synopses paraphrased from Rotten Tomatoes because I’m lazy):

Cropsey (Documentary - A legit one too - no ‘found footage’ nonsense)

An urban legend conjured up to keep kids from exploring abandoned buildings became a horrifying reality when a mysterious drifter began abducting children in their tight-knit urban neighbourhood. Growing up, Zeman and Brancaccio were deluged with terrifying tales of Cropsy, a murderous mental patient prone to snatching children off the streets and taking them to the derelict buildings that were once part of the Willowbrook Mental Institution. Some claimed Crospey had a hook for a hand; others claimed his weapon of choice was a large axe. In 1987, that legend crossed the boundary into reality when 13-year-old Jennifer Schweiger vanished without a trace. Her disappearance sent shockwaves of fear through the community, but it was only the first. Before long Crospey had a name: Andre Rand. When a photo of a handcuffed Rand was released in the press, the public didn't need a conviction to know he was the man who had been preying on their children. In this film, Zeman and Brancaccio go back to the scene of the crimes to search for clues, and speak with the locals about how the case has haunted them for decades.

Silence takes on a terrifying new dimension for a young woman living alone in the woods. Author Maddie Young lives a life of utter isolation after losing her hearing as a teenager. She's retreated form society, living in seclusion and existing in a completely silent world. But one night, the fragile world is shattered when the masked face of a psychotic killer appears in her window. Without another living soul for miles, and with no way to call for help, it appears that Maddie is at the killer's mercy... but he may have underestimated his prey. As this horrifying game of cat and mouse escalates to a breathless fever- pitch, Maddie must push herself beyond her mental and physical limits in order to survive the night.

In this taut psychological thriller, the tension is palpable when Will (Logan Marshall-Green, Prometheus) shows up to his ex-wife Eden (Tammy Blanchard, Into the Woods) and new husband, David's (Michiel Huisman, "Game of Thrones") dinner party. The pair's tragic past haunts an equally spooky present: Amid Eden's suspicious behavior and her mysterious house guests, Will becomes convinced that his invitation was extended with a hidden agenda. Unfolding over one dark evening in the Hollywood Hills, The Invitation blurs layers of mounting paranoia, mystery and horror until both Will-and the audience-are unsure what threats are real or imagined.

Jerry (Ryan Reynolds) is a seemingly normal man trying to succeed in his new job at the Milton Bathtub Factory. He lives in a normal apartment the type you would expect from a young bachelor with his dog, Bosco, and his cat, Mr. Whiskers. Yet something seems off. As the new guy at work, Jerry is asked to help plan the company picnic and he meets Fiona, an attractive English girl from accounting. Jerry immediately takes a liking to Fiona and excitedly goes home to tell his pets about her. And surprisingly, they answer. But all this is just the beginning of an insanely bizarre and twisted tale.

Simon and Robyn are a young married couple whose life is going just as planned until a chance encounter with an acquaintance from Simon's high school sends their world into a harrowing tailspin. Simon doesn't recognize Gordo at first, but after a series of uninvited encounters and mysterious gifts prove troubling, a horrifying secret from the past is uncovered after more than 20 years. As Robyn learns the unsettling truth about what happened between Simon and Gordo, she starts to question: how well do we really know the people closest to us, and are past bygones ever really bygones?

*I forgot that I’d recently hijacked someone’s Amazon Prime account and stumbled upon some decent horrory shiz. So if you’re signed up to the service or are some kind of technical wizard who can access films through the Dark Web or Blockbuster or The Matrix or whatever, these suggestions might be worth a gander:*

"Spring" follows a young man in a personal tailspin as he flees California to the Italian coast where he meets a woman carrying a dark secret”.

Thanks, Rotten Tomatoes. You make a brilliant film sound like the landfill crime fiction novels that litter the shelves at Tesco. The film is incredibly well scripted, the relationship between the ‘young man’ and the ‘woman carrying a dark secret’ unfolds very convincingly. Without giving too much away, the ‘dark secret’ is a genre staple. But it’s revealed so slowly and convincingly that, however far-fetched it may be in reality, it totally make sense within the context of the story. I’m not sure how poncy that sounds but I don’t want to give too much away. Long story short, you could watch this with a non-horror fan and they’d possibly be as gripped by the story as you are.

I think I recommended this last year...

A surgery-obsessed teen struggles with her outcast status while plotting to lose her virginity and save her sister from the ravaging effects of cystic fibrosis in this genre-bending shocker. Pauline (Annalynne McCord) is a pretty young girl whose penchant for picking scabs has escalated into a fanatical obsession with the flesh. Recognizing this, Pauline's stern mother insists that the young girl visit the church therapist for counseling. Incensed at the prospect of being judged by a religious hypocrite, Pauline only delves deeper into her visceral fantasies while concocting an ingenious plan to impress her mother. Meanwhile, as Pauline begins devising ways to combat her younger sister's cystic fibrosis, her adolescent hormones kick into overdrive.

Note: Be careful who you watch this with. My mates are proper horror fans but I almost felt the need to apologise to them after we watched it (they loved it, fortunately). Think David Cronenberg meets David Lynch in a quiet coffee shop, only for Stephen King’s Carrie to leave a trail of pigs blood on the floor as she invites herself to join them to hash out some script ideas over a cup of tea.

I left the film feeling shell-shocked. ‘Normal’ viewers may wonder what films, if any, you would consider inappropriate to share with the casual viewer. Would you pop Salo on after dinner when your grandparents are over on Christmas day? Or maybe you’d leave Requiem for a Dream on in the background to lighten the mood at a close friend’s wake? And why hasn’t anyone seen this basement that you’re constantly repairing? Could it be that the walls are plastered with old newspaper clippings and pictures of celebrities with their eyes crudely cut out with a Stanley knife?

Well that took a dark turn. I think I might pop Finding Nemo on.
Posted by Gordon at 05:15 No comments: